World Hepatitis Day (WHD) is recognized annually on July 28th, the birthday of Dr. Baruch Blumberg (1925–2011). Dr. Blumberg discovered the hepatitis B virus in 1967, and 2 years later he developed the first hepatitis B vaccine. These achievements culminated in Dr. Blumberg winning the Nobel Prize in Physiology or Medicine in 1976. Organizations around the world, including the World Health Organization (WHO) and CDC, commemorate WHD to raise awareness about viral hepatitis, which impacts more than 354 million people worldwide. WHD creates an opportunity to educate people about the burden of these infections, CDC’s efforts to combat viral hepatitis around the world, and actions people can take to prevent these infections.

Viral hepatitis — a group of infectious diseases known as hepatitis A, hepatitis B, hepatitis C, hepatitis D, and hepatitis E — affects millions of people worldwide, causing both acute (short-term) and chronic (long-term) liver disease. Viral hepatitis causes more than one million deaths each year. While deaths from tuberculosis and HIV have been declining, deaths from hepatitis are increasing.

Stories from the Field: CDC Collaborates with the Country of Georgia

CDC representatives meet with Dr. Amiran Gamkrelidze (Director) and other leadership at the National Center for Disease Control and Public Health in Georgia to discuss the Hepatitis C Elimination Program. (June 2021)

Beginning in 2015, CDC partnered with the country of Georgia to launch the first Hepatitis C Elimination Program in the world. In 2019, Georgia was designated the first-ever EASL International Liver Foundation Center of Excellenceexternal icon in viral hepatitis elimination.

In June 2021, CDC and the National Center for Disease Control and Public Health, Tbilisi, Georgia (NCDC) conducted training and launched the second nationwide hepatitis B, hepatitis C, and COVID-19 serosurvey. The serosurvey will provide information on progress toward the prevention and elimination of hepatitis B and hepatitis C in Georgia, and will provide key information for ongoing interventions needed to meet viral hepatitis elimination targets. The field work for this survey is expected to finish in September 2021. CDC’s international work helps reduce disease burden globally, including for overseas travelers and those migrating to the United States.

Global Hepatitis Work in Other Countries

To further decrease the burden of all types of viral hepatitis, CDC also helps countries build capacity for surveillance, testing, care, and treatment and assists with development and implementation of national control and elimination programs. CDC has recently supported other countries, including Pakistan, Uzbekistan, and Tanzania.

Learn more about CDC’s work to prevent hepatitis B globally. 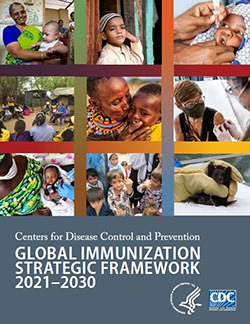 In 2021, CDC released the Global Immunization Strategic Framework 2021-2030, which provides a roadmap to achieving progress toward a world where everyone is protected from vaccine-preventable diseases (VPDs), such as hepatitis A and hepatitis B.